Raku firing methods got me into this life of ceramics. I was walking past the Anderson Ranch on the way home after a day of work and skiing. I was really just a ski bum kid that wanted to be an artist. It was dark but there was a red glow and a bunch of people standing around. I walked over to see what was happening. Anyone who has watched pots being pulled with tongs from a red hot kiln and plunged into the snow or hay probably understands – I was hooked.

At the time Anderson Ranch was just a few cabins and some die hard potters in the winter. Later that summer it blossomed into it’s first version of the Anderson Ranch summer workshops under the direction of Paul Soldner. The interest in the Japanese Raku methods of firing and the philosophy that it followed were new on the scene of American Ceramics and Paul was a driving force behind it. This matched up well with my studies of Japanese Art History and my already profound interest in the Zen culture that produced Raku tea bowls and current Japanese artists like Shoji Hamada.

This interest sent me on to the Sun Valley Center for the Arts and Jim Romberg. I think this pot reflects his influence a great deal. To this day, when I take time to join other potters for a raku firing event, I fall back in time and style to Sun Valley. I’m surprised at the way each piece turns out. The more I know my slips, glazes and firings, the closer my work is to what I intended. Some people think it is all alchemy and magic. But really, Raku firing is a great experience of practice, intention and participation with fire and other elements. 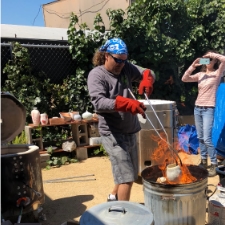 Classes for children and adults